Steine an der Grenze – Stones on the Border

The “Särkov”, as the Saargau area is known in the Moselle-Franconian dialect, is a landscape whose attractiveness primarily based on the diversity and variety of its nature.

On the slopes rising from the Merzig Basin and the tributary valleys flowing into it, orchards alternate with different kinds of vegetation; depending on the soil type, from semi-arid grassland to orchid covered limestone pastures and woodlands. The higher ground in the area is characterised by broad fields of wheat, oil seed rape and corn, particularly in summer.

With the villages of Büdingen and Wellingen on the German side and Launstroff and Waldwisse on the French side, the border is not just the town boundary but the dividing line between areas of the friendly neighbouring European countries, and there are great views for many kilometres into the Lorraine region. In 1986, this exceptional scenic backdrop inspired Saarland sculptor Prof. Paul Schneider, who lives in Merzig, to invite artists from all over the world to the town for his international “Stones on the Border” sculpture symposium, to create stone artworks on the theme of borders and border crossings. A sequence of seven projects resulted in 26 artworks that invite hikers to take a fantastic walk on both sides of the German-French border.

Supported by the “Stones on the Border” friends association on the German side and “Menhirs de l’Europe” on the French side, and with the support of the Merzig municipal authority, the international sculpture symposium has promoted cross-border dialogue many years after the artists actually completed their works back in 1992.

For drivers, there are large parking areas at the start of the route, both in Büdingen and coming from Wellingen, to make it easier to take a walk among the stones. The walking route is known as the “Gustav Regler Way” and is part of the extensive network of cycling and walking routes in and around Merzig.

Anfahrt Steine an der Grenze – Stones on the Border 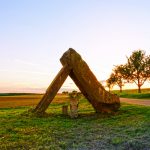 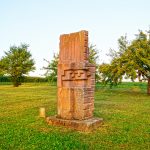