The only preserved Romanesque sacred building in Saarland

St. Peter’s was constructed as a monastery church around 1200 by Premonstratensian canons from Wadgassen, who came to Merzig in 1182 as successors to previous Augustinian canons. It is laid out as a three-nave basilica with transept, secondary choir towers, side apses and a single west tower.

The Gothic cross vault, decorated with heraldry, was only added in the 16th century after a fire. During renovation work in the 1960s, the north aisle around the lady chapel was extended to the west, while the south aisle was given a new entrance hall. The key architectural features are the two north portals, the small “cemetery portal” on the transept and the larger main and lay portals on the aisle. As part of the extensive exterior renovation of St Peter’s, completed in December 2004, the original main portal in the west tower was re-opened.

Inside St Peter’s, visitors will find a large number of ritual artworks, particularly from the Baroque period. Particularly worthy of note are the figures representing Christ, the Virgin Mary and the 12 apostles, created by Wolfgang Stupeler around 1700. The 17th century pietà in the side chapel in the north transept is also a highlight. Other eye-catching features include the high altar, thought to have been made by the Saarlouis sculptor Ferdinand Ganal around 1738, crowned by the figure of a pelican, an early Christian symbol, the 14th century Gothic plague cross above the altar, the revolving baptismal font and the St. Nicholas statue rediscovered and restored just a few years ago. Extensive renovation work in 1984/85 also uncovered the wall paintings by the Merzig painter Heinrich Klein, painted over after the second Vatican Council, which the artist based on works by Eduard von Steinle in the style of the Nazarene School.

St. Peter’s parish church, especially for visitors coming from the East from the direction of Brotdorf the dominant feature of the town centre, is the most important building in our town and the only preserved Romanesque sacred building in Saarland. . Despite the many changes St. Peter has undergone in the course of its long history due to catastrophic fires, war damage or redesigns in the style of different periods, apart from the west end the church has largely retained its original design. 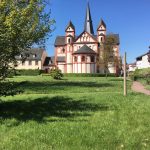