The oldest surviving map of Merzig shows the previous parish church of St. Walpurgis (A) in the middle of the cemetery and right next to the significantly larger late-Romanesque collegiate church of St. Peter (C, D), whose nave was in ruins at the time.

Although the parish was served by the monks, there were separate churches. St. Peter did not become the parish church until 1725. St. Walburga’s was torn down around 1760. In its place, a small chapel was built, also dedicated to Walpurgis, but this was demolished at the beginning of the 19th century.

In 2013, excavations in the former churchyard exposed the outline of a central structure. Four semicircular apses / conches are arranged around a square central section, above which a tower is to be reconstructed. On the outside of the conches, two projections on each side indicate the position of pillars or pilasters. Tetraconch sacred buildings were constructed from Late Antiquity to the high middle ages. They can be found over a wide area but are rare. Because of the outline and stratigraphic indicators, a date in the late early to high middle ages has been proposed.

Radio carbon dating confirms the medieval construction of the walls. The small volume of findings make more precise dating based only on archaeological criteria very difficult. The central structure was built in an existing cemetery, which is likely to have been laid out around Merzig’s first parish church in the early middle ages. This church building has not yet been located (it may be underneath St. Peter’s). Around 1150, Augustine canons settled in Merzig and took over the running of the parish. They were replaced by Premonstratensian monks in 1182.

St. Peter’s church was constructed around 1200 and was the work of the Premonstrantensians. By contrast, the central structure may have been built as part of the foundation of the Augustinian canons in the mid-12th century. It is unlikely that the unusual tetraconch building would have been planned as a parish church. The physical separation of the collegiate church (E) and the parish church is confirmed in the 16th century. The central structure may have served as the parish church from this date at the latest (until 1725). The cemetery was still in use until 1839. 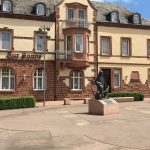